We get to hear what our colleagues are thinking about and think about ways of transforming our own practice by encountering their suggestions and reflections.

Eng-Beng Lim, director of the Dartmouth Consortium of the Studies in Race, Migration, and Sexuality “

Now in its second year, the RMS consortium serves as a social and intellectual hub.

Since its founding a year ago, the high-energy Dartmouth Consortium in the Studies of Race, Migration, and Sexuality has sponsored or cosponsored more than two dozen events. The momentum continues this fall with a series of online activities, including a panel discussion last week in partnership with Hanover's Howe Library, a lecture at 4 p.m. today, and an antiracism workshop at 4 p.m on Nov. 17.

But sponsoring events for the Dartmouth community and beyond is just one part of the RMS mission. 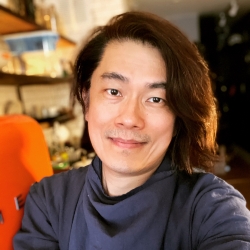 Eng-Beng Lim is the director of the Dartmouth Consortium of Studies in Race, Migration, and Sexuality.

Eng-Beng Lim, the consortium's director, sees RMS—an interdisciplinary research and teaching initiative—as a social and intellectual hub where staff, faculty, and graduate and undergraduate students can find fellowship and create the community they envision.

The consortium's more than 60 members meet regularly to discuss issues of race and ethnicity, gender and sexuality, and indigeneity and migration across many disciplines and interdisciplines, says Lim, an associate professor of women's, gender, and sexuality studies. "If you would like to come to RMS and create a subfield to engage with students or scholars, we can make that happen."

Those conversations serve to deepen the scholarship and curriculum related to RMS issues, which is one of the consortium's goals.

"We get to hear what our colleagues are thinking about, and think about ways of transforming our own practice by encountering their suggestions and reflections," says Lim.

What's happened in feminist theory in the last 20 or 30 years "is really what RMS is all about," says Susannah Heschel, the Eli Black Distinguished Professor of Jewish Studies. "It is the conjoining of the two that's really revivified feminist scholarship in many ways. And what's cutting edge is what's going on in RMS."

As "a grateful supporter" of RMS, Heschel says Lim inspired her to reorganize how she presents the material in her courses on Jewish history and culture.

"I teach it according to race, migration, and sexuality," Heschel says. "I talk about Jewish involvement in the slave trade that actually students often don't know much about it, and what that implies, as well as antisemitism, racism, and so on, and talk about migration. Students love to hear about that."

The RMS faculty, undergraduate, and postdoctoral scholar and fellow programs—comprising 49 positions this year—are another facet of how the consortium fosters connections throughout the Dartmouth community.

Daniella Omeruo '21, an RMS scholar, says the consortium really spoke to her this year, "because of everything that's going on globally with racism and discrimination."

A self-described activist, Omeruo says she has spent her time at Dartmouth trying to evoke change on a local level, using the resources available to her as a student, and "wanted to take it up a notch."

As an RMS scholar, she's able to educate herself and others on pressing issues and consult with faculty members about research methods, and how to best use language, tools, and resources "to actually get things done," says Omeruo, an African and African American Studies major.

Najwa Mayer, a Mellon Postdoctoral Fellow in women's, gender, and sexuality studies, is one of several postdoctoral scholars from the Society of Fellows, Leslie Center, and Provost's Fellowship programs who are working with RMS this year. Mayer says she was drawn to the consortium format—a "communing of scholars and students"—and RMS's approach to bringing scholars and students together across various fields of expertise. The RMS framework models the kind of knowledge production and learning that is shared and open, and "isn't absolute," she says.

"The intellectual pursuit in general is something that is vulnerable," says Mayer, a research associate-lecturer who teaches about race, Islam, and feminism through aesthetic traditions. Part of what interdisciplinarity does—and workshops and discussions among scholars, students, and faculty do—is to lay bare how this work is always in formation, "always open to new inquiry, to criticism."

And while RMS just recently hit the one-year mark, some members already consider it a sort of home base.

With its focus on critical ethnic studies and other critical fields, such as feminist and queer studies and American studies, the consortium "has really provided an intellectual home," says Mingwei Huang, an assistant professor in women's, gender, and sexuality studies and one of six RMS faculty fellows. "It feels almost obvious, but I just want to underscore its importance as a place for faculty of color, and especially junior faculty of color, to gather and have community."

Upcoming RMS events include the Antiracist Syllabus Workshop, presented by the Leslie Center for the Humanities, Nov. 17 at 4 p.m. The workshop features Xavier Navarro Aquino—an American Council of Learned Societies Emerging Voices Fellow and research associate at the Leslie Center and RMS—in conversation with Raul Palma, assistant professor of writing at Ithaca College. It is the first of a series of antiracism workshops organized by Aquino in collaboration with the Leslie Center, RMS, the Dartmouth Center for the Advancement of Learning, and Latin American, Latino, and Caribbean Studies.

Aimee Minbiole can be reached at aimee.minbiole@dartmouth.edu.